A few years ago, someone decided that slapping a pair of cat ears on headphones was going to be the next big thing, and the next thing everyone knew, headphones with cat ears on them started getting sold everywhere.

A while back, local gaming companyRazer,known for making some of the flashiest gaming gear in the market did the same, with its Kraken BT Kitty Edition gaming headset and now, it has decided to up the ante with a new pair of kitty cans, with one of the most iconic cats in the world – Hello Kitty.

The company has partnered with Sanrio to release a line of Hello Kitty-themed gaming accessories including a mouse, a mousepad, a chair, a lumbar kitchen and of course, a Bluetooth headset that will have any fan of the Japanese cat squeal – because let’s be real, theRazer Kraken BT Hello Kitty and Friends Edition is the cutest headset you’ve probably laid your eyes on.

Hardware-wise, the headphones are the Kraken, and the Kraken BT Kitty Edition gaming headset comes in Quartz, with two pointy triangular ears at the top of the head. This Hello Kitty edition is slightly different, in that it comes in white and pink. The tip of the ears are curved (just like Hello Kitty herself), and the headset even features the character’s recognisable ribbon on the ear.

On the band, users will find the text “Hello Kitty and Friends” on the crown, with pink stars on each side of the band. Underneath the band, however, users will find Hello Kitty and her friends sitting in a row. On the headset’s ear cups, the usual Razer logo is replaced with Hello Kitty’s face that lights up in white when the headset is turned on. It’s clear that the design is specific to the Sanrio character and there’s no denying that it is attractive to people who love anything kawaii. But aesthetics aside, what can it do?

It’s rather straightforward to use and users who are new to Razer and the headset will be able to quickly learn what the controls are for. What may take additional learning though, is that the power button can be used to perform other functions too. To turn on and off the headset, all one has to do is press and hold the button for about four seconds. However, press on the button once and it plays or pauses the music, and accept or end a call. Press and hold for two seconds and you will launch voice command, reject an incoming call or swap calls if you have a few people calls on hold over the line.

So far, the headset features all the basic functions one would require when listening to music or gaming, and is easy to learn and use. At 298g, the Kraken BT Kitty Hello Kitty and Friends Edition is also light on the head. The earcups, decked out in fabric and plush leatherette, are comfortable on the ears. The band however, is made out of plastic. 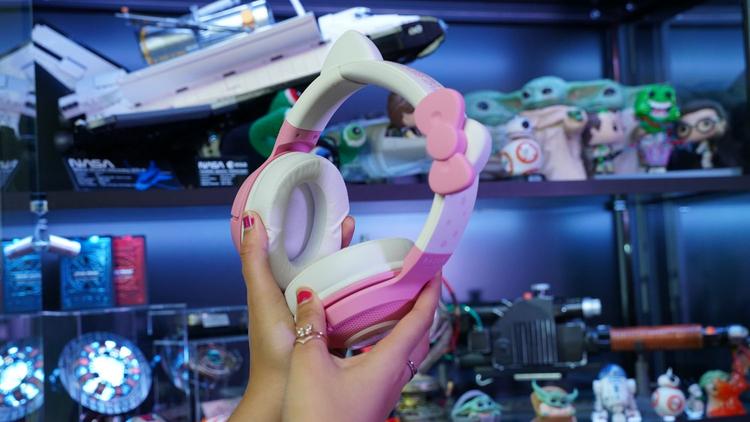 Despite it being comfortable to a certain extent, we found ourselves taking it off after about five to six hours of straight use. For additional comfort, try putting it on with a cap, to allow for comfort when using the headset for long hours. Luckily, there isn’t a strong clamping pressure, which adds to the comfort though it’s one of the cons when it comes to performance, since it merely rests on your head, and doesn’t seal ears from external audio..

Without a proper seal, the sound quality tends to be quite airy. Highs and mids sound echoey and far off. The listening experience immediately improves when you push the cups towards your ears. With slight pressure applied, the sound quality isn’t that bad. In fact, it’s not bad at all. But realistically speaking, your hands would be busy typing on your keyboard or doing other things. Constantly pushing the cups and cushions into your ears isn’t exactly the best form of care if you’d like to use this headset for the long run.

Which is unfortunate because the headset comes with 40mm drivers, which are basic for gaming purposes. Whilst not providing a mindblowing or life changing experience for gaming, it still does its job for a casual gamer. For audiophiles though, there are plenty to pick on.

Fans of bass would be disappointed too. Whilst it can be improved when you head onto the Razer Audio App (available on Android and iOS) and customise your audio settings or simply set it to ‘Enhanced Bass’, it still isn’t the most satisfying for bass-lovers.

Being Bluetooth enabled, and featuring two internal beam-forming microphones, the Kraken BT can be used for calls and meetings too. We find that there’s no disruption or crackling when using the Kraken BT to take a call, but the microphone still lacks clarity. The user’s voice will come out slightly unclear and for some reason, softer.

For S$199.90, one can’t help but expect more out of sound quality from the headset. Perhaps, the Kraken BT Kitty Hello Kitty and Friends Edition headset would be great for casual gamers and music listeners who aren’t fussy with the listening experience. The option to customise your listening experience is there with the Razer Audio app, but frankly speaking, there’s only so much the app can do.

The clear winning points to this headset are the adorable design and the comfort it brings. This is a headset that will instantly win the hearts of Hello Kitty fans – regardless if they’re gamers or not. Even non-fans of the Sanrio character can appreciate the attention to the little details in Razer’s design. The headset is definitely comfortable given the heavily cushioned earcups and the lack of clamping force, but that comes at the cost of sound quality.

In all, the Razer Kraken BT Kitty Hello Kitty and Friends Edition has all the basic functions and necessities for one to effectively use the headset for work, leisure and play. It checks all the marks that one desires out of a headset and there isn’t much to complain about if you’re a casual user. Users who are looking for a more advanced listening experience can opt for the Razer Barracuda X 4-in-1 Wireless Gaming Headset instead. This collaboration with Sanrio also means that you’re owning the cutest headset from the brand ever – something for fans and collectors to ponder on when deciding on which headset to purchase from the beloved gaming brand.

The Razer Kraken BT Hello Kitty and Friends Edition is the cutest headset to ever exist from the brand and will instantly win the hearts of Sanrio lovers. Comfortable and adorable, it’s something that casual listeners can enjoy for the day to day.

Don’t judge a book by its cover, for behind all this makeup, is a geek just like you. To simply put it, superheroes, Star Wars, Harry Potter and all things gore and creepy makes this girly girl swoon.