The telephone has transformed from a tethered object for connecting you with friends and family into a portable, pocket-size computer capable of capturing and communicating an enormous amount of information with people you’ve never met. If you pine for the simpler days of phones that didn’t constantly demand your attention, the $300 Light Phone II could be the just the answer. The Light Phone II sets the boundaries for you, limiting you to basic activities such as making calls, sending text messages, and using its rudimentary map app. Whether those limitations are practical is another question entirely, and the Light Phone II’s hardware and software shortcomings ultimately detract from its utility.

Who Should Buy the Light Phone II?

The Light Phone II, which we first reviewed two years ago but has since seen numerous software updates, isn't meant for the masses. Its creators believe that the answer to resisting the attention economy is as simple as retreating from it, and that removing yourself from the equation, even temporarily, will lead to a happier and more productive life. That’s easier said than done, however, and is what makes the Light Phone II’s all-or-nothing approach such a hard sell. In addition, Jenny Odell, who popularized the term “attention economy” in her book How to Do NothingHow to Do Nothing, believes this approach doesn't address the deeper problem, which is that we need to learn how to engage with technology in a way that's healthy and helps us build meaningful communities.

That said, you can find plenty of testimonials from Light Phone users on social media about how it has helped them disconnect. Some even say the Light Phone II replaced their primary phone.

The Light Phone II is an arguably bland, stubby block of matte plastic that’s slightly larger than a deck of cards. It measures 3.8 by 2.0 by 0.30 inches (HWD), weighs 2.8 ounces, and is available in gray or white. Its aesthetic is boring by design and is meant to encourage you to pay less attention to your phone. That said, it's also one that’s sure to provoke questions from friends when you pull it out of your pocket.

Keeping with its minimalist philosophy, the Light Phone II has a 2.8-inch front-lit E Ink display with massive bezels. In fact, the sum of the bezels on each side is just about the same size as the display. And while the screen is bright enough to use in direct sunlight, we noticed intermittent ghosting and uneven front lighting.

A power button and headphone jack sit on the phone’s top edge, while menu and volume buttons are on its right side. A micro USB charging port and speaker are on the bottom rail. The phone is splash resistant, but is unlikely to survive an accidental drop in a body of water.

Despite its utilitarian look, very little about the phone's design is ideal. It’s too short to cradle between your neck and shoulder when you’re on a call. The menu button sits awkwardly between the volume buttons; I would have preferred it to be on the left side of the phone, which is bare. And good luck finding someone with a micro USB charging cable if you leave yours at home.

The Light Phone II is available only unlocked, but it works on all the major carriers and a handful of MVNOs (check out the company's site for compatibility). Light Phone also offers its own $30-per-month unlimited talk and text plan on AT&T's network with 1GB of data, plus an unlimited talk, text, and data plan for $70 per month. We don’t recommend the unlimited plan for hotspotting, however, because the Light Phone II’s Qualcomm Snapdragon X5 modem supports only 2x10Hz carrier aggregation and is much slower than most modems in newer phones and dedicated hotspots. 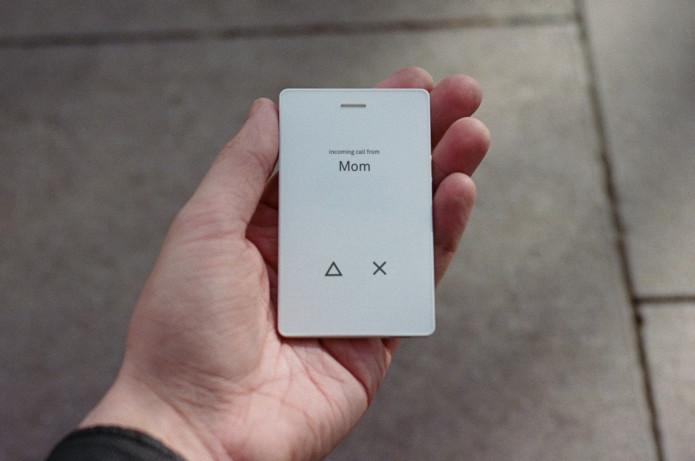 Cellular coverage is solid thanks to VoLTE support on AT&T, T-Mobile, and Verizon, with bands 2/4/12/13/17/25/26. That said, band 66 (one that all three carriers use) and band 71 (for rural T-Mobile customers) are both missing. A 2.4GHz Wi-Fi radio is onboard, but the phone doesn’t support Wi-Fi calling.

The Light Phone II’s small stature means that its microphone is farther from your mouth than on most phones when you hold it up to your ear. Call quality sounds good, but noise cancellation is poor. In testing, the phone picked up background noise from the subway and passing traffic during many calls.

The earpiece speaker volume peaks at 86dB, which is loud enough to hear in most situations, but it sounds tinny. Mids are overrepresented, and we noticed some distortion in upper-frequency ranges. Bluetooth 4.0 and a headphone jack are present, and both are better options for audio.

The Light Phone II takes a while to turn on. After you tap the power button, the Light Phone logo doesn't appear for about another 10 seconds, and then you have to wait approximately 45 seconds for the phone to completely boot up. On the home screen, you see battery level and signal indicators; a large clock; and an asterisk if you have any missed calls or texts. Tap the bottom of the screen to go to the phone book or hit the menu button to go to the main menu.

The Light Phone II runs Light OS, an extremely stripped-down version of Android. When you press the phone’s menu button, the OS shows you options for the phone, messages, alarms, and settings. You can also add podcasts, music, and map apps from your browser via the Light Phone dashboard. Although the company has long discussed an option for streaming playlists, a notes app, and rideshare app integration, none of these capabilities are available as of this writing. It also lacks nearly all the accessibility features you’ll find in Android or iOS.

Podcasts is, by far, the best of the optional apps. Simply log in to the Light Phone dashboard and search for your favorite podcasts to instantly add on the phone. The recently introduced maps app, on the other hand, is a mess. It intermittently goes into offline mode and the E Ink display often refreshes at the exact moment you need to make a turn. The Music app is even more problematic. It supports only non-DRM MP3s; most people just pay for a streaming service, and the few who buy music probably purchase lossless formats. The phone has 8GB of storage, but there's no way to see how much is actually available.

To make a call, pull up the E Ink dialer or the phone book. I recommend the latter because the dialer is painfully slow. The phone book, on the other hand, is easy to use. Simply enter the numbers on the phone or use the Light Phone dashboard to sync your contacts via iCloud or a VCF file.

The Light Phone supports SMS messages only (so no iMessage or WhatsApp). You can receive emojis, but you can't reply with them. And if you receive a photo or MMS, you get only a picture icon that will make you wonder exactly what you missed until you get to a computer or another phone, since photos and other attachments are forwarded to your linked email address. When you want to reply, texting on the Light Phone’s tiny E Ink keyboard can feel like an exercise in futility. Thankfully, a recent talk-to-text feature lets you dictate messages, which is far more useful.

Battery life is acceptable at just over six hours of talk time and about three days of standby. Since the Light Phone II has a micro USB charging port, it doesn't support fast charging. That said, it takes only about 90 minutes to fully charge the battery.

The Light Phone II leaves out a lot by design. For example, you can’t access an app store and NFC isn't available for mobile payments. But the most obvious omission is a camera.

The phone’s E Ink display essentially precludes the possibility of a camera. And while the Light Phone II is supposed to help you disconnect, doing so comes at a pretty high cost—a cost I wasn’t able to put into words until I found myself walking home one evening and saw a pastel pink sunset melting into the horizon. It was one of those moments when you’re forced to stop and just take in the wonder and uncertainty of the world around you. And while you can make the argument that I may have missed the sunset altogether if I were scrolling through Twitter, I’m not so sure; over the past few years, I’ve found myself stopping more than ever to look at the trees, listen to birdsong, and experience the world around me.

A camera enables us to capture the moments that make our lives unique. Other people surely witnessed the same sunset, but I had no way to capture that particularly visceral moment for myself in Chicago during the fall of 2021. I don’t have a way to come back to it in the dark days of winter, or documentation of the moment that I can share with friends at dinner. Like the harsh wind that smacked me in the back while I stood at the edge of the cemetery to watch the sunset, that moment is gone.

Is It Possible to Disconnect?

I agree that the internet and social media can have devastating effects on our well-being, but giving them up completely is tantamount to surrender. Instead of filling our days with paranoid reading and trying to piece together disparate themes in anticipation of the next calamity—the stuff that makes social media so pernicious—why not seek alternatives?

Like it or not, phones are a major part of our lives. Although the Light Phone II presents a refreshing alternative to just about every other phone on the market, the fundamental concept behind it works better in theory than in practice. And from its lagging keyboard to its unevenly lit display, the hardware experience is just as flawed as the concept.

If you want a basic voice phone, you can’t beat our Editors’ Choice winners, the $195 Sunbeam F1 and the $240 Kyocera DuraXV Extreme. Both support VoLTE, have basic cameras, and last several days between charges. The Kyocera is the more durable of the two, but if you're really looking to disconnect, the Sunbeam F1 doesn't offer a web browser or games.

If your goal is to simply be more mindful of internet and social media usage, we think the $399 Apple iPhone SE and the $449 Google Pixel 5a are excellent options if you make a few tweaks. For example, you can create focus modes that work with your schedule, uninstall unnecessary apps, set time limits on the apps you want to use less often, and create space in your day to put down your phone and leave it there. This will give you a comparably priced phone you can step away from, but that still has the ability to capture and share the moments that are worth it.

Next: Is cheating in games ever a good thing?