The new Realme custom Android skin is out. Called the Realme UI 3.0 (first impression), the skin comes with new icons, improved feature-packed AOD, interface-level changes, an improved AI Animation engine, and improved fluidity. It also brings in the latest Android 12 OS features, including a new visual design, better quick settings, a privacy dashboard, more location tracking control, and richer notifications, among other things. Upcoming Realme smartphones are likely to come pre-loaded with the new Realme UI 3.0, while the company has announced that the skin will start rolling out to existing and compatible devices soon. In this post, we will go through the main Realme UI 3.0 features introduced in this build, the release date in India, steps to try it out early, and the update roadmap.

Also Read: MIUI 13 release date in India, features, update, device list, and everything else we know so far

Realme took the covers off this new build on October 13th at the Global launch event for the company’s latest mid-range product, the Realme GT Neo 2. Right now, a majority of the Realme smartphones are running the Realme UI 2.0 build, and a majority of them are slated to get the new Realme UI 3.0 in the coming months.

The Realme UI 3.0 build is based on Android 12, and the first beta was released as soon as the Android Open Source Project (AOSP) files were updated.

The new Realme UI 3.0 takes many quality features, some of them ported from ColorOS and OxygenOS. Let us explore these Realme UI 3.0 features here:

Compared to the outgoing 2.0 build, the new Realme UI 3.0 feels more expressive with plenty of colours. In addition, the brand has designed a new layout interface that gives a spatial sense to the user by cutting down on extra white space between elements and condensing the information in the menus.

Some UI elements have been widened, with the brand choosing more pastel colours to help create depth and establish order and harmony. This new UI is more engaging, pleasing to the eyes, and more intuitive. 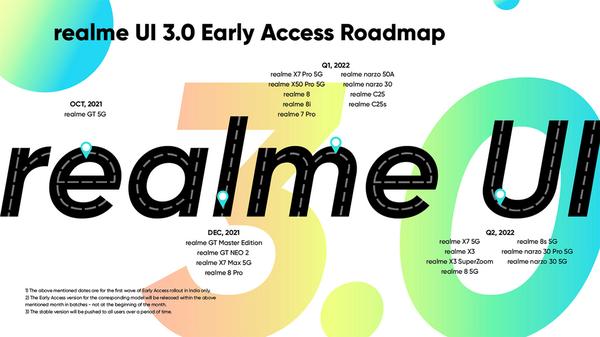 Moving to the icons, they are now 3D and contain layer upon layers for that pleasing look. We get to see the use of vibrant colours to provide a sense of context and visibility. Every icon and has been redrawn and redesigned by the team after thorough research. Elements such as unnecessary strokes and shadows have been removed to follow the UI symmetry.

The Realme UI 3.0 also brings changes to the Always-on-display (AOD). Realme is calling their AOD Sketchpad AOD, which is similar to what we see on OnePlus smartphones. Sketchpad AOD converts your portrait wallpaper into artistic AOD. Additionally, there are many new AOD effects added under the personalization option.

A feature that first surfaced on iPhones has now made its way on Android phones as well. Omoji is a 3D avatar of your face with custom hairstyles, headwear, makeup, and more. These avatars can also mirror your expressions in real-time though this feature is limited to select Realme smartphones.

For Omoji, Realme uses a face capture algorithm to create high-precision 3D models layered onto their visual engine for a more playful look. The use case for Omojis is limited as of now, but we hope more and more developers will update their apps to support this.

Android 12 brings a new theming engine which has been used here as well. This new Smart Theming Engine automatically picks colours from your wallpaper and applies those colours across system elements.

We will hear more on this when the Android 12 stable beta starts hitting the masses.

Android 12 AOSP has been focused on Privacy quite a bit this time. With this new Realme UI build, you get permission in visual forms for better control over your privacy. There is also the option of Approximate Location, which you can enable on apps that only need a general area location while a new Precise Location has also popped up. As the name suggests, this new option provides your accurate position within a couple of meters to apps.

The Privacy Indicator also lets you know whenever an app uses your phone’s camera, microphone, or location. You can go into settings and change the permission setting.

With Realme UI 3.0, Realme is introducing AI smooth engine, which reportedly decreases memory usage by 30% while improving app launch speeds by 13 percent. In addition, the UI also utilizes Smooth Animation Engine to smoothen out the interaction. As a result, every interaction on the Realme smartphone now looks and feels incredibly fluid; swipe and tap feel responsive and smooth to the eyes.

Realme UI 3.0 update should start rolling out later this month. The official roadmap released by the brand mentions October as the beta release date, with Realme GT 5G being the first phone to get this new update. Below is the complete Global timeline for the Realme UI 3.0 update.

How to apply for Realme UI 3.0 beta update

Follow these steps if you’re interested in trying out the Realme UI 3.0 before the stable wider release.

Once this procedure has been complete, you will be notified if and when a beta build of Realme UI 3.0 is available to download for your device. To be on the safer side, it is always recommended to begin this beta update procedure following a complete Data backup. Another thing to note here is that the software is still in beta, and some of the features might not work on your smartphone.

Realme 8 gets an open beta update of Realme UI 3.0 in India. The update comes with version number RMX3085_11.A.04, and it can be applied through the phone’s Settings –> Software Update –> Tap on the settings icon in the top right corner –> Trial Version –> Submit your details –> Apply Now.

Anyone with the Realme 8 Pro can register for the Android 12-based Realme UI 3.0 Open Beta program. The only requirement is that the device should be on firmware version RMX3081_11.A.45. To apply go to Settings > Software Update > Gear Icon > Trial Version > Submit Details > Apply Now. Applicants who get selected will receive the beta software via OTA. The company says that there are only limited slots available.

The second major upgrade Realme UI 3.0 for 2020’s flagship Realme X50 Pro 5G has been announced. The update is based on Android 12 and is available for devices in India in the beta program. The Realme X50 Pro 5G users can enrol themselves on the program from the smartphone’s Settings –> Software Update menu, clicking on the Settings icon in the top-right corner, then clicking on Trial version > Early Access > Apply Now, and submit the requested details. The Realme UI 3.0 beta update will rolled out to you if your application is accepted.

Realme UI 3.0 early access programme for Realme X50 Pro in India will kickstart soon, the company has officially confirmed. However, if you are a Realme GT Master Edition user, you can now enrol yourself to Realme UI 3.0 early access update now. This can be done through Settings –> Software Update –> Settings Icon –> Trial Version –> Apply Now –> Submit your details. The programme is only available for a handful of users; therefore don’t be surprised if the seats are full.

After Realme X7 Pro, Realme has announced early access to its latest custom Android skin Realme UI 3.0 for Realme 8 Pro in India. The access will only be available to a limited number of people. To join Realme UI 3.0 early access for Realme 8 Pro, users can go to Settings –> Software Update –> Tap on the settings icon in the top right corner –> Trial Version –> Apply Now –> Submit your details and finish the quiz.

Realme has started rolling out the Realme UI 3.0 update for Realme X7 Max and Realme GT. That said, the update is available via early access and open beta, respectively. This means that the company is currently testing the new firmware. Users can apply for Realme UI 3.0 early access for Realme X7 Max by going to Settings > Software Update > Tap on the settings icon in the top right corner > Trial Version > Apply Now > Submit your details and finish the quiz.

The Realme UI 3.0 open beta programme for Realme GT, on the other hand, can be joined by going to Settings > Software Update > Tap on the settings icon in the top right corner > Trial Version > Apply Now > Submit your details > Apply Now.

Realme has confirmed that the Realme GT series smartphones will be the first ones in the market to get the latest Realme UI 3.0 update based on Android 12. The brand will hold the official launch on the 13th of this month and will reveal all the updated timelines.