It will be powered by a Unisoc T606 octa-core 1.6Ghz processor and will feature a 6.5” HD+ display with a 5000mAH battery. The Galaxy A03 will support Dolby Atmos audio on wired and wireless headphones.

https://images.indianexpress.com/2020/08/1x1.png The device is available in three colours – Black, Red, and Blue

The rear camera array will have a two-camera setup with one 48MP main sensor and a 2MP to help create a focus blur effect. It will also have a 5MP front camera which has a built-in “Beauty Mode”. The phone will also have a “Smart Selfie Angle” feature where it will detect when you are having a group selfie and will automatically switch to a wide-angle mode.

Boult Audio ProBass Curve X has launched in India. The neckband-style earphones come with type-C fast charging technology, Boult claims that this technology enables the earphones to provide 10 hours of playback with 10 minutes of charging. The ProBass Curve X are rated IPX5 water-resistant.

The Boult Audio ProBass Curve X earphones are set to be sold for Rs 999 via Amazon.in and will be available in two colour options, Black and Blue. The earphones come with a standard 1-year warranty.

The earphones claim to provide 10 hours of playtime on a 10-minute charge with type-C fast charging technology and a total of 15 hours of playback on a single charge. The earphones come with calling and playback controls on the neckband along with support for voice assistants like Google Assistant or Siri.

The Portronics Pico 10 is a smart projector that comes with a 280 lumens LED lamp and Android 9. The projector is capable of creating images of up to 150 inches on any surface. The projector can also project footage at up to 480p.

The device has an in-build 5W wireless speaker, and multiple connectivity options like HDMI, Miracast, USB Type-A and Aux and Bluetooth connectivity for audio output. Also included is a 5200mAh rechargeable battery that allows for a claimed watch time of 160 minutes.

Netgear has launched two new Mesh extenders in India for your Mesh Wifi networks. These are the Nighthawk AX1800 and Nighthawk AX6000. The AX1800 is a 4 stream extender that supports WiFi 6 with speeds of up to 1.8Gbps. It is priced at Rs 12,799.

Meanwhile, the AX6000 is a 8-stream extender that offers up to 6Gbps speeds for 4K/8K UHD streaming, lag free online gaming and uninterrupted video calls. The Nighthawk AX6000 is priced at Rs 27,499.

There is IP67 certification and a claimed battery life of up to 25 days on standby and five days on regular usage and the watch supports Android 4.4 and above, or iOS 8 and above. It comes in Jet Black, Silver Grey, Olive Gold, and Midnight Gold colours. 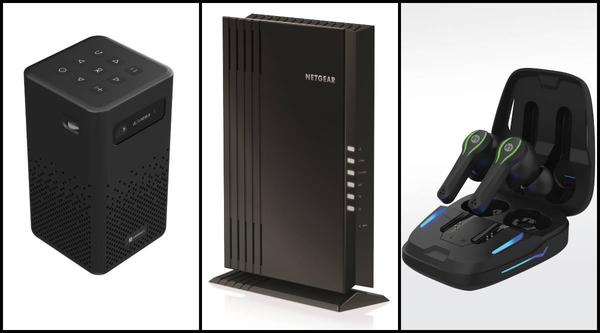 Inbase has launched three true wireless audio products in India – the Free Buds Active, Free Buds Pro and Buds Mini Pro. The Free Buds Active come with a built-in LED lights in the buds and case, 4 hour battery life, USB-C port for charging and are available in two colour variants – black and white. The buds are priced at Rs 1,499.

Meanwhile, the Inbase Free Buds Pro come with IPX5 certification and a claimed battery life of about 30 hours. These earbuds too are offered in both black and white, and are priced at Rs 1,499.

The Buds Mini Pro are priced at Rs 999 and offer 5 hour battery life on the buds with a total claimed run time of 35 hours with the case. These buds too get IPX5 certification and two color variants – black and white.

Logitech has launched their new POP Keys and POP Mouse products, adding some vibrance to their Studio series. The new POP mechanical keyboard is styled like a typewriter, with eight swappable emoji keycaps, which is intended for typing out emojis. Using the Logitech software, users can also map those buttons to any other shortcuts. Its 12 new FN keys feature Snip Screen, Mute Mic and Media Key activities to facilitate the modern workday.

The POP mouse is compact and wireless, featuring a Smartwheel that easily switches between high-precision to speed scroll modes. Using the Logitech Flow technology, users can easily text, file, and copy-paste between separate computers – via Bluetooth. Both products are available in three colours – yellow, pink, and violet, and can easily connect with up to three devices at a time.

Intex has launched a new smartwatch called the FitRist Vogue that features a 1.7-inch display with 550 nits brightness and comes with a metallic body. The watch is also able to pair with upto two smartphones via Bluetooth and has an in-built microphone and speaker to take calls.

Available in Desert Gold, Titanium Silver, and Sapphire Black, the Intex FitRist Vogue features a claimed battery life of about 7 days and is priced at 10,999

Pebble has announced the Pebble Buds Pro, a pair of TWS earbuds that come with ENC, or Environmental Noise Cancellation. The earbuds also feature quad microphone technology for calls.

The earbuds also come with a smart pause technology that can automatically detect when you take off the earbuds, pausing your music playback until you put them back on. The Pebble Buds Pro are priced at Rs 1,999 and are available in both black and white colours.

The budget phone also has a 5MP rear camera with flash and a 2MP front camera. It is powered by an unspecified 1.4GHz quad-core processor and supports expandable memory up to 128GB. The Itel A27 is priced at Rs 5,999 and comes in three colourways – Crystal Blue, Silver Purple, Deep Grey.

The projectors also feature a contrast ratio of 2,000,000:1 and a claimed Laser Lifetime of 30,000 hours. There are eight interchangeable lenses that users can use to switch between short throw to long throw ratios (0.65 – 10.8:1). The projectors also come with other features like horizontal and vertical lens shift and fast switch support and a brightness of up to 21,000 lumens.

BenQ has unveiled a new 32-inch gaming monitor aimed towards console players, delivering 4K resolutions at a 120Hz refresh rate via HDMI 2.1. It can be further unlocked to 144Hz through a DisplayPort 1.4 connection, offering a smoother gameplay response.

The MOBIUZ EX3210U comes with a 31.5-inch IPS display panel, offering a minimal response time of 1ms. It is also equipped with Vesa Display HDR600 certification with a peak brightness of 600 nits and further settings to enhance your viewing experience, such as a Light tuner, Color Vibrance, and Black eQualizer.

The monitor is available in a premium white exterior and houses a 2.1 channel treVolo speakers with 2Wx2 speakers and a 5W subwoofer. The MOBIUZ EX3210U is available to purchase on Amazon at Rs 87,500 and other leading computer hardware retailers in India. BenQ is also offering an onsite warranty of 3 years with the monitor.

Noise has launched their new VS202 truly wireless earphones, powered by Tru Bass and Hyper Sync technology, offering crystal-clear voice clarity and quick pair with Bluetooth v5.3 enabled devices. The buds are equipped with 13mm drivers, with a low latency of 60ms, and dedicated individual mics that amplify the voice quality.

The Instacharge feature offers 120 minutes of playback time with 10 minutes of charging, and can go up to 24 hours on a full charge. The earbuds have a half in-ear design and full touch controls, and are available in four colours – Charcoal Black, Mint Green, Midnight Blue and Snow White.

The Noise Buds VS202 is now available on its official website, Amazon, Flipkart, and other retail outlets at an introductory price of Rs 1199.

Anker has launched its high-speed 20W USB Type-C charging port, designed to match the maximum input of the iPhone 12, providing the exact power. Anker claims that this new port is powerful enough to offer 3 times faster charging than Apple’s original one.

The Anker20W PD Fast Charger is available in black and white colours, on Amazon, at a special sale price of Rs 1299. The company is also offering 18 months warranty.

Sony has launched its WH-XB910N over-ear wireless headphones, offering exceptional bass and noise cancellation, thanks to the new Dual Noise Sensor technology. The headphones are equipped with soft, oval-shaped ear pads, made of synthetic leather, making them comfortable to wear all day.

It also features the Precise Voice Pickup technology, which combines two in-built microphones to enhance your voice for hands-free calls. Using the Sony Headphones Connect app, users can adjust the ambient noise level and nullify the eternal sounds for a better listening experience – which again, is adjusted automatically based on the surrounding environment such as crowds or a quiet room.

Sony boasts of 30-hour long battery life on a full charge, with a 10-minute quick charge feature that gives you 4.5 hours of playback time. Additionally, it comes with the Multipoint connection system, letting you connect to two Bluetooth devices at once, and 360 Reality Audio. The Sony WH-XB910N headphones are priced at Rs 14,990, and can be purchased across all Sony centres, major stores, and e-commerce websites in India.

Next: Oppo’s Find N is an impressive first folding phone