Android 10 has been out for nearly 9 months now, but one of its best features, desktop mode, is still widely unknown. That’s because it’s technically hidden in Android 10, requiring a development flag to be enabled as well as support built-in to the stock launcher app. Thankfully, the developer of Taskbar has figured out a way to make Android 10’s desktop mode far more useful, bringing a Samsung DeX-like experience to some devices.

Taskbar is an open-source Android app that puts a floating start menu and recent apps tray on top of any screen. Since it supports launching Android apps in freeform multi-window, it even comes pre-installed on Bliss OS, a popular Android port for x86 PCs. Back in early November, farmerbb released a fork of the open-source Lawnchair launcher with Taskbar integrated into it. This gave us an early look at what Android 10’s hidden desktop mode could look like with some development effort, but there were some glaring issues that needed fixing. The desktop mode user experience needed fixing so that freeform multi-window behavior worked as you would expect, the setup process needed to be cleaned up so you could control the DPI/UI without needing another app, and a better solution had to be found so that you wouldn’t have to change your default launcher. Now, farmerbb has updated Taskbar to version 6.0 to address all of these issues.

Setting up Taskbar’s desktop mode is quite easy: 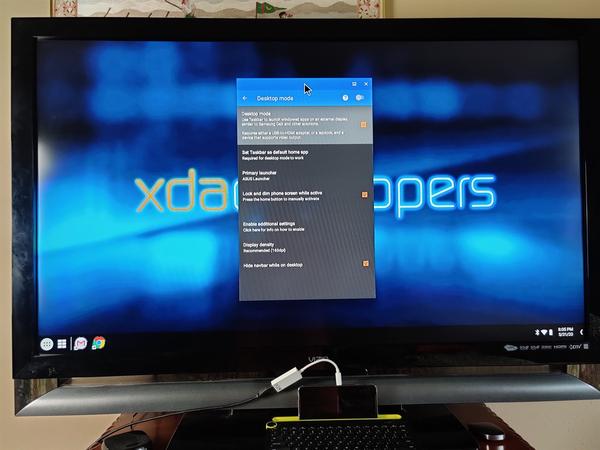 Once connected, you can use the start menu to launch apps, search for apps, add app icons to the home screen, open some system menus, and more. You can tap the icon next to the start menu to add/show widgets. You can launch multiple instances of windows, and in some cases like Google Chrome, have multiple tabs.

There are loads of other options and changes in Taskbar 6.0, so I recommend you read the full changelog available here.

Keep in mind that in order to actually make use of this feature, your smartphonemust support display output. Qualcomm’s latest Snapdragon 800 and 700 series chipsets natively support DisplayPort Alternate Mode over a USB 3.1 Type-C port, but some vendors (like Google) have disabled this functionality on their smartphones. If your device doesn’t support DisplayPort Alternate Mode, then you may have luck using a DisplayLink-certified adapter and the DisplayLink Presenter app to mirror the phone’s display. Screen mirroring using a DisplayLink adapter isn’t as ideal as native desktop mode through a standard connector, but it’s better than not having any display output at all! Fortunately, Taskbar can still be used if you’re just mirroring your phone’s display so long as the app is set as the default launcher, but you’ll have to use the developer’s SecondScreen app to change the resolution and density.

The biggest downside to desktop mode on Android right now is the limited app support. Even though Samsung and Huawei have both offered desktop mode experiences for years and sell millions of smartphones a year, there’s not a lot of demand from users to support desktop mode. That means that a lot of Android apps out there aren’t optimized for larger screens. Google wants to change that because broader Android app support for larger screens will benefit Chromebooks as well, but sadly, there’s still a long way to go before most Android apps support larger screens. Thus, while using Taskbar, you may notice that some apps refuse to run or just look terrible, and there’s not much you can do to fix that.

If you have one of the following smartphones, I recommend giving this app a try:

You can download Taskbar 6.0 from the Google Play Store link below or compile the app from its source code on GitHub. The app is totally free to use, but there’s a $1.99 donate version in case you want to support farmerbb’s development efforts.

Prev: How to convert your phone or tablet into a digital whiteboard for FREE