Home > HUAWEI > This Week in Worker Conquests: MLB Owners Cancel Games, Amazon Fresh Workers Make Demands, and Teachers’ Union Says Masks Stay on in Seattle Schools
Serving you up an absolute feast of labor news this week, folks. Belly up to the table and unhook that belt: It’s time to eat.

Star-bucks round-up, clap clap clap-clap-clap: Three more Starbucks stores filed to unionize, and the Cooper Point location in Olympia announced they’ll be doing so as well. Steven Greenhouse, formerNYT reporter, shared some of the strategies Starbucks management is using to break the unions:

SponsoredHelping you create a space uniquely yours for work or play,with style and art, your way. Custom framing, photo frames, printing on metal, paper and canvas.

Three Ugly Starbucks Strategies:1) After the union drive began in Buffalo, it added new hires to the stores in order to dilute pro-union votes & also to cut workers' hours to try to get pro-union workers to quit & to show that unhappy things happen when workers seek to unionize— Steven Greenhouse (@greenhousenyt) February 27, 2022

• Audio leaked last week to More Perfect Union contradicts a letter Starbucks sent out to thousands of its employees that claimed a worker was not fired for organizing. It’s worth a listen.

• Bloomberg reports the Starbucks union has filed 20 more labor complaints with the NLRB over these union busting tactics.

• Management is in a panic and is holding a meeting for all managers on Monday to discuss the “organized labor activity.”

NEW: Starbucks has scheduled a meeting on March 7th for all store managers and higher-ups to “share the facts about organized labor activity.”Workers at over 110 stores have announced their union campaigns. Last week, they filed 20 unfair labor practice charges with the NLRB. pic.twitter.com/1wzXHNHtgx— More Perfect Union (@MorePerfectUS) March 2, 2022

MLB owners cancel games:MLB owners, the poorest of whom is worth $400 million, decided to continue locking out the players into the regular season, and they canceled the first two regular season series. Veteran outfielder Jason Heyward explained that this was the owners’ plan all along. The MLBPA’s stance is very reasonable, as you can see here in their statement Tuesday: They basically just want teams to try to win baseball games, and they want young players to get paid fairly. But don’t just take it from me. Here’s what a veteran MLB coach had to say about it:

The players need to fight for the future of the game. Over the past few years, I’ve loved watching the game flourish and grow. You see Fernando Tatis Jr. bat flipping and having fun—that’s what baseball should be. Seeing Rob Manfred smile when he announced they’re locking players out, that’s a fucking travesty. Seeing what the billionaires are doing is awful. We haven’t had a normal season in two years. It’s so depressing to see the future of our national pastime in the hands of these greedy billionaires.

These MLB players had to work incredibly hard to get through the minors just to make it, too. What do the guys still in minor leagues think of all this?

The coach told me the following:

A lot of the younger guys don’t understand what’s happening. They don’t really understand the impact this lockout will have on the rest of their careers. Clubs are keeping them in the dark so they can keep putting them through hell. The clubs say, ‘You’re being treated so well, we give you three meals a day, we put you in a hotel during spring training.’ Meanwhile, a lot of [minor leaguers] have trouble just paying their bills during the season. Minor leaguers deserve better pay, better housing, better everything. I slept on an air mattress for six months as a minor leaguer. That was a big reason why I retired [from playing].

“The players just want to be treated decently. [The owners] are ruining our game to help their pocketbooks,” he said.

Want to support the players? Join the fans who canceled their MLB TV subscriptions.

The pressure is being felt. Now imagine if everyone that canceled their subs held out until blackouts were lifted?? They send this message out because the message from the fans has been received LOUDLY & CLEARLY via canceled subs. Baseball is eating itself alive. https://t.co/ePOlyMCr50— Dallas Braden (@DALLASBRADEN209) February 28, 2022

Tesla makes a U-turn: Is the labor movement working? Well, on Wednesday a notoriously anti-union tech mogul who inherited his wealth from a diamond mine in Zambia just announced he wouldn’t stand in the way of a union vote.

By the way, Tesla factory worker compensation is the highest in the auto industry https://t.co/Peo3qtYc5D— Elon Musk (@elonmusk) March 3, 2022

Technology brothers and sisters, unite! Tech workers appear to be pushing pro-labor. TheWashington Postreports that Apple employees are organizing by using Android phones to communicate outside of the earshot of Big Employer.

Perhaps sensing a disturbance in the Force, a hospitality software company is now offering two weeks of paid vacation before workers even start, according to Bloomberg.

Amazon Fresh workers make demands: As I mentioned last week, workers at the Amazon Fresh store on 23rd and Jackson are unionizing, and Business Insider reported Tuesday that their demands include a $25 minimum wage. This news comes on the heels of a second Long Island Amazon warehouse announcing they’ll be voting to unionize. 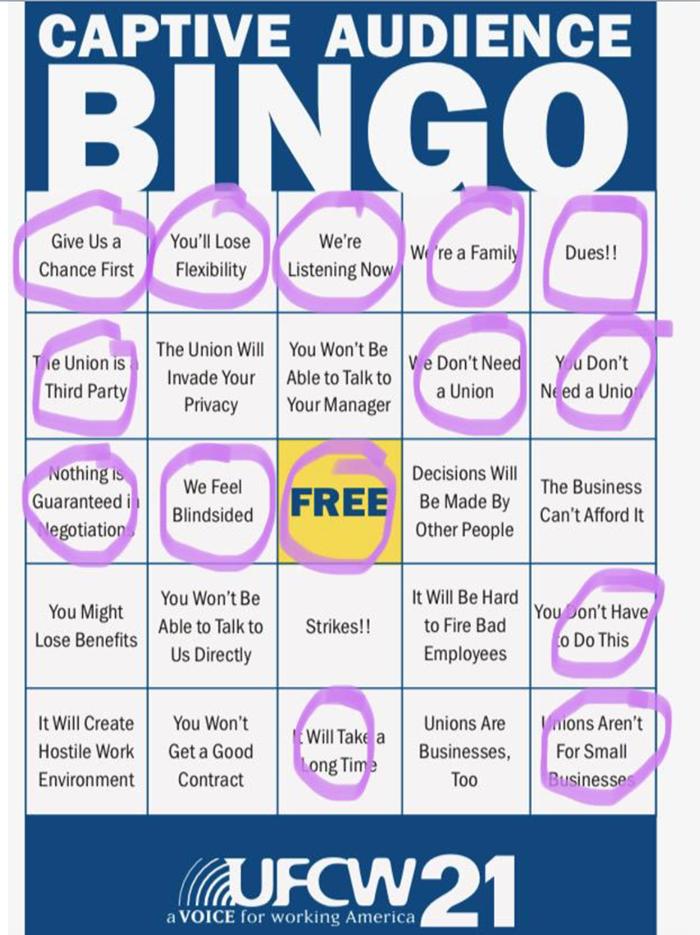 It's official! THE NLRB has approved our petition for an election in a second Staten Island warehouse, LDJ5. Two groups of Amazon workers in NYC are set to make their voice heard in the coming months, so please keep updated & support our grassroots campaign in any way possible!✊ https://t.co/dUuvosz84U— Amazon Labor Union (@amazonlabor) March 3, 2022

New York, New York: Elsewhere in New York, two big pieces of labor news arrived, as yesterday the New York Times Tech Guild won their election 404-88, and, last Friday, the NY Magazine Union ratified their new contract. One of their senior writers tweeted how happy she was about the fact-checker she was working with getting a 50% raise:

One bright spot: @NYMagUnion ratified our first contract in a unanimous vote a few minutes ago. Going back to work now on a story with a fact checker who gets a 50 percent raise in less than 3 weeks. This is solidarity! pic.twitter.com/u4hJhEnE0B— Bridget Read (@bridgetgillard) February 25, 2022

Workers at Gizmodo, Jalopnik, Jezebel, Kotaku, Lifehacker, and The Root are hoping for a similar outcome, as they just announced they’re going on strike. Read why here.

Shooters shoot: A New York sanitation worker reminded the world that all labor is skilled labor.

More than ever, we depend on your support to help fund our coverage. Support local, independent media with aone-time or recurring contribution. Thank you! Contribute

SoHo votes yes:On Wednesday, the Retail, Wholesale and Department Store Union (RWDSU) announced the SoHo REI store voted overwhelmingly (86%!) to unionize for better working conditions. Yes, in the release they dunked on that union-busting podcast REI started. That’s the kind of news that makes you pitch a tent. All eyes are now on the flagship store back home.

Masks stay on in Seattle schools:Although the mask mandate lifts next weekend, KUOW reports that students and staff will still be required to keep their masks on. Any changes to the mask policy will have to be negotiated with the Seattle Education Association. The union’s president says, “We believe there should be no rush to lift the mask mandate.” Seattle is still averaging over 100 new COVID cases a day.

Hopefully these workers see a boost of the kind enjoyed at Mid-Columbia Center for Living in Hood River, OR. NW Labor Press reported, “Base pay will increase by 7%, and the center’s 72 union-represented workers will receive a $1,000 bonus. They’ll also get a 3% raise in both July 2023 and July 2024. Their health plan will have a lower deductible with more coverage.”

California Kroger workers threaten strike:The Guardian reported Sunday that 60,000 Kroger workers are ready to strike if they don’t get a $5 increase to their pay over the next three years. This looks extremely reasonable considering Kroger’s CEO made $22.4 million in 2020—904 times the median employee wage.

So what’s it like to strike anyway? And do they work? NW Labor Press has more on how it works and how strikes in 2021 turned out. Pretty, pretty, pretty good.

Are you or someone you know a Hanford worker affected by radiation exposure? Then please follow this link:

Are you or someone you know: ✔️ A current or former worker employed at an @ENERGY Department nuclear site? ✔️ Diagnosed with an illness caused by radiation or toxic exposure?If yes to both, you or they may be entitled to compensation. https://t.co/yH8DbsObgN pic.twitter.com/GWK5eoDuy9— U.S. Department of Labor (@USDOL) March 2, 2022

Crossroads bingo card filling up: My source at Crossroads reports that management is doing its best to fill out this bingo card in recent captive audience anti-union meetings:

New bill enough for drivers? As Rich reported yesterday, Washington state bill HB 2076 would extend protections Seattle drivers have to those working across the state, but labor unions aren’t sure if this is too much of a concession.

Auburn employers get a fine and jail time:On Saturday, the Washington Attorney General’s office announced the co-owners of Advanced Cleaning Solutions, a hospitality company, withheld over $45,000 from their employees, wrote them bad checks, and threatened them with termination if they asked about the money they hadn’t received. A Superior Court Judge sentenced co-owner Travis Jackson to 120 days in jail and required repayment to the 24 affected workers.

All the stuff I couldn’t get to:California fined a hotel for not rehiring workers they laid off during the pandemic, NW News Network reported that staff of longtime Insurance Commissioner Mike Kriedler are speaking out against mistreatment, UPS workers revealed to More Perfect Union details on the culture of abuse in the company, and President Biden sent another pro-union tweet about the PRO Act.

Welcome to Coasting Culture: I hope you’ve saved some room ‘cause boy do I have a dessert for you. People are apparently slacking off so much at work recently—”quitting in place”—that Business Insider describes it as “a quiet but seismic shift in workplace culture.”

If you’re one of these slackers, heroically reading this while you’re supposed to be working, I thank you for your service, I salute you, and I think you deserve 10% off at Denny’s. Death to Hustle Culture. Long live Coasting Culture.

What’s your best coasting story? I’ll go first. A guy I know who works remotely figured out his boss would leave him alone as long as he appeared “active” on Microsoft Teams. In order to appear “active,” his computer mouse just has to move every five minutes. There are apps that can do that, but he can’t install new apps on his work computer. So, after some testing, he determined that if he put his watch on the mouse in just the right place, the tick would move the mouse a little. Now every morning this guy wakes up, sets up the watch, and plays video games all day.

Sound off in the comments with your tales of great Coasting Conquests.

And like a little digestif after a heavy meal, here is some absolute nonsense to get stuck in your head. Bon appetit!