Let’s put it first: the new Apple TV 4K looks exactly like the previous model, and it’s faster. But what really stands out is the new Siri remote, which is actually an apology for what happened before. It is not elegantly thin and easy to lose, but a bit thicker and easier to hold. There is a direction board that also has a touchpad function instead of the creepy touchpad. The new Siri remote is very good. I suggest existing Apple TV 4K users only need to buy it separately for $60 and skip the new box altogether.

It all comes down to just how entrenched you are in Apple's ecosystem. I'll confess: even though I've tested out plenty of streaming boxes over the years, I've always come back to the Apple TV as my primary viewing device. I prefer the slick interface to Roku's dated UI. It had Dolby Vision when most others didn't. And, as an iPhone owner, I love having the ability to quickly AirPlay content, or mirror my screen. (Something that's now available on competing platforms, too.) Apple also won me over with its generous offer to upgrade HD iTunes purchases to 4K — that was particularly useful when Disney finally boosted its films to 4K last year. 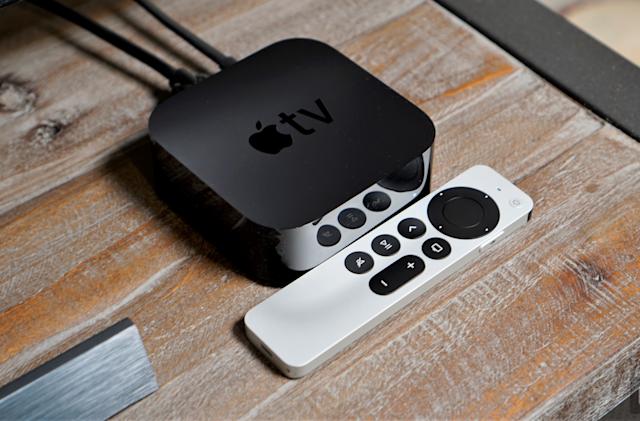 The big downside before was the old Siri Remote, which was simply a pain to use. That’s why I’m so impressed by this revamp. The new Siri Remote feels practically anti-Apple. It's taller, thicker and its directional pad hearkens all the way back to the 2010 Apple TV's minimalist clicker. This isn't a company that often goes backwards design-wise. The revised Siri Remote is a sign that Apple that's finally responding to user complaints. Because of its bigger size and slightly curved aluminum case, it actually feels better to hold than the last model, which was just an incredibly thin and fragile rectangle. (Who puts glass on a remote? Only Apple!)

Based on my experience so far, that heft has also made it harder to lose the Siri Remote in my couch. Though that's definitely no excuse for not including AirTags, or some sort of remote finding feature, despite what one Apple exec thinks. On a brighter note, the revamped directional pad is a dream to use. It's perfect for making fine-tuned selections, like choosing between two movies or episodes listed near each other. But, it's also touch sensitive, allowing you to swipe around freely like on the last remote. And as a nice bonus, you can use the directional ring like a jog dial to scrub backwards and forwards in a video. That's reminiscent of the classic iPod scrollwheel, and it's far more accurate than just swiping left or right.

The layout is also more functional: a back button replaces the confusing "Menu" button, while the home, play/pause and unified volume controls all make a return. There's also a mute button up front, while the Siri voice controls are shoved over to the right side of the remote. That change kept throwing me for a loop at first, but after a few days I appreciated being able to activate voice commands without worrying about hitting any face buttons.

Apple also added a power button up top, allowing you to turn your TV on and off, as well as put the Apple TV to sleep. Unfortunately, since the TV power button relies on infrared, it couldn't actually control my TCL Roku TV, but that's a problem I have with most universal remotes. One other benefit of the new design: you can actually tell which way is up just by holding the remote.

I would say that the new Siri Remote is the real selling point of an Apple TV. Given that Roku and Amazon haven't really innovated much in remote control over the years, if you want something that feels fresh, there are not many choices. One disadvantage is that you will not be able to use the new remote as a game controller because Apple removed the accelerometer and gyroscope. But to be honest, I can't imagine actually playing anything with that old clicker.

Next: Disassembly shows that the new Apple TV 4K is easy to repair, but Siri Remote is troublesome