Military working dogs are being honored today for the roles they serve alongside soldiers and other service personnel. The US Army designated March 13 as National K9 Veterans Day in appreciation of these military dogs.1 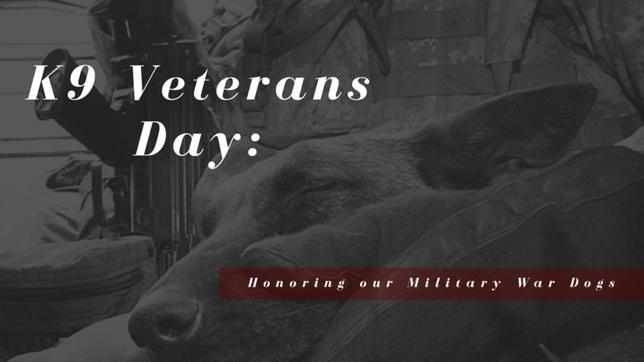 The use of dogs for tactical purposes was adopted by the US military in the 1940s. Although these canines were initially used as sentries and messengers, K9 units have evolved to become an integral part of ensuring safety and security, including the protection of military installations.1 According to the nonprofit organization Paws of Honor, there are more than 3000 military dogs deployed around the world.2

Modern US military K9s are used for sniffing out improvised explosive devices, weapon caches, and illegal narcotics or substances. K9s can also use their superior sense of smell to act as scouts for tracking down suspects, assisting law enforcement personnel during operations. These working dogs also act as a psychological deterrent for people who recognize them as security agents, according to the US Army.1

Working military dogs undergo rigorous training to build strength, agility, and communication with their human handlers. These K9s typically start working with units at age 2 years and can serve up to 13 years.1

According to Paws of Honor, many K9s require more veterinary care because of the demanding nature of their jobs. The organization’s mission is to provide accessible, high-quality veterinary care and products for retired military and law enforcement dogs at no charge.3 Currently with over 30 retired military working dogs in its program2, Paws of Honor works with veterinary partners such as veterinarians and dog food companies as well as corporate sponsors to help it reach its goal.3

Next: Russia attacks Ukraine: Latest news on the crisis