Home > iPhone > No-Fly is no solution for Ukraine

As days stretched into weeks, our news screens have been bombarding us with images of brave and determined Ukrainian civilians seeking shelter and sometimes getting killed as Vladimir Putin’s war of choice exploded over their homes, schools, hospitals.

As we watched, we were all Ukrainians. Volodymyr Zelenskyy was the brave leader who made us all want to fight for what is right. And this week we all grieved but could not look away as our screens filled our safe lives with unspeakably horrific pictures of Putin’s military demolishing a Ukraine maternity hospital.

We saw bloody pregnant women on stretchers and knew that other women and probably newborns had to be somewhere under the rubble. We heard TV anchors and correspondents saying — and read our most famous newspapers reporting — it was a “bombardment,” an “airstrike.”

Our news screens recycled Zelenskyy’s weeks of frustration that the United States and NATO would not provide the “No-Fly Zone” that could help Ukraine stay safe or at least survive. We tensed with rage, but understood, as our president and other NATO leaders explained that if our military enforced a “No-Fly Zone” it meant shooting down nuclear Russia’s jets — and that could plunge us into a nuclear World War III.

But very few of us heard what two retired U.S. army generals — both frequent TV network analysts — had to say, separately, Wednesday afternoon and late that night. And, as we’ll see later, apparently very few of the TV news anchors or their news-decider bosses heard them either.

At lunchtime, retired Lt. Gen. Mark Hertling said the crater he saw on his screen looked like “a long-range strike” by ground launched artillery or missiles. “The majority of these strikes are being conducted by artillery and missiles,” Gen. Hertling said. The trigger is being pulled by a soldier who could be many miles away from the target. “So a No-Fly Zone is no panacea,” he added. “This is the Russian way of war.” 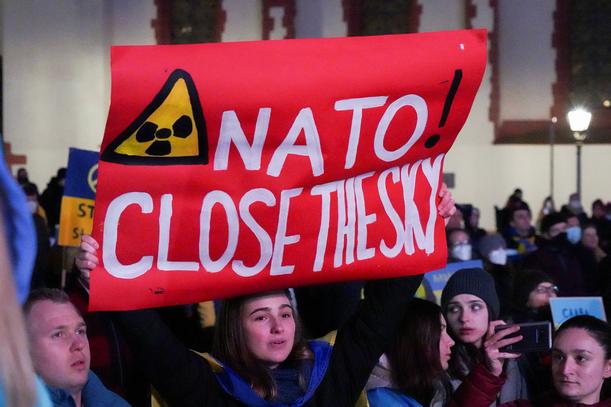 Late that night, retired Gen. Brig. Gen. Mark Kimmett said those war-torn homes, apartments, schools and hospitals we’d been looking at were mainly victims of “continuing fire from hundreds of ground-launched rockets and missiles.” Most were fired from 12 to some 60 miles away from their targets, he said. A “No-Fly Zone” would not affect those deadly assaults.

But the anchors didn’t then ask their military analysts how, or even if, Ukraine’s military could protect besieged Ukrainian citizens from ground-launched assaults that could indeed be causing the abhorrent devastation. And the news-deciders continued recycling the vain pleas and frustrations, of Zelenskyy and other Ukrainian political figures who still wanted the West to provide a protective “No-Fly Zone.”

Then on Thursday, C-SPAN provided wall-to-wall coverage of the Senate Intelligence Committee’s annual hearing in which the semi-famous and not-at-all famous heads of all the intelligence agencies delivered their assessment of the national security threats America faces. Congressional fact-finding investigations often turn out to be stages for political posturing – and eye-glazing finders of few facts. Which might explain why they attract few viewer eyeballs.

But this time was the exception. And perhaps the most globally meaningful facts were found during an exchange late in the hearing, initiated by perhaps the Senate’s most meaningful and even reasonable figure who does not maneuver to twirl in the spotlight. Maine’s certifiably independent Sen. Angus King began asking the Director of the Defense Intelligence Agency, Lt. Gen. Scott Berrier, about what is causing all the damage such as that Ukraine hospital attack that has shaken the world.

“What’s hitting them?” the senator asked. “Is it mostly bombing from aircraft or is it missiles and artillery?

And the DIA head replied: “It is a combination of mostly missiles and artillery and mobile rocket launchers.” Lt. Gen. Berrier added that actually, the Russian air force “is having a tough time” flying missions over Ukraine now, as defensive antiaircraft weapons supplied by the U.S. and others in NATO seem to be having an effect.

And now you know the rest of the story that has so dominated the news coverage on both sides of the Atlantic.

Next: Why a no-fly zone is a no-go for NATO