Last week, Chinese online retailer Suning revealed the Oppo K9 Pro will launch in China on September 26, and the date is now officially confirmed by the company as it took to Weibo to announce the K9 Pro's launch event will begin in China on Sunday at 5PM local time.

Oppo's touting the K9 Pro as a gaming smartphone, and while it hasn't detailed the phone's specs sheet yet, the company shared a poster on Weibo, showing us the smartphone's rear and confirming color options.

The phone's back cover sports a camera island spanning the panel's width, reminding us of Xiaomi's Mi 11 Ultra. It includes a flash module and three cameras headlined by a 64MP unit. 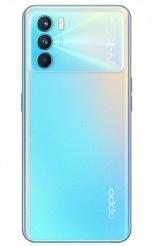 We've seen the K9 Pro in these colors before, but the image Oppo shared reveals an antenna line on the top-side of the phone, suggesting a metal frame. It also tells us that the K9 Pro will be powered by a MediaTek chip, which is expected to be the Dimensity 1200 SoC.

While we await more details about the K9 Pro from Oppo, a smartphone with model code PEYM00 and believed to be the K9 Pro was spotted on TENAA last month with its full specs: 6.43" FullHD+ AMOLED screen, 8GB/12GB RAM, 128GB/256GB storage, in-display fingerprint reader, 5G support, and 4,400 mAh battery.

The selfie camera uses a 16MP sensor, whereas the 64MP primary camera is joined by 8MP and 2MP units.

With the official unveiling still four days away, we may see Oppo confirm a few more features of the K9 Pro in the days leading to the launch event.

Next: Oppo K9 Pro will get a new color variant on October 20