Trudeau called the request and resulting response “heartbreaking,” noting that Zelensky has been asking for the no-fly zone for “many days.”

“It is something that is heartbreaking. To have to say we can do so many things to support, but the risk of escalation, the risk of spreading… of involving NATO in a direct conflict if we send NATO planes over Ukraine to shoot down Russian planes,” Trudeau said.

“We can do an awful lot and we’re doing everything we can. But we can’t do that.”

There have been ongoing calls for NATO to impose a no-fly zone over Ukraine since Russia’s invasion of the country despite the repeated rejection of the idea by western leaders concerned about triggering a wider war in Europe.

A no-fly zone would bar all unauthorized aircraft from flying over Ukraine. Western nations imposed such restrictions over parts of Iraq for more than a decade following the 1991 Gulf War, during the civil war in Bosnia and Herzegovina from 1993-95, and during the Libyan civil war in 2011.

Declaring a no-fly zone could force NATO pilots to shoot down Russian aircraft, which NATO leaders fear would lead to an all-out escalation in Europe.

Speaking to CTV National News alongside Trudeau, Deputy Prime Minister Chrystia Freeland said Canada is throwing “everything we have at this,” noting that the economic sanctions placed on Russia by Canada and others have forced the Ruble into freefall.

“The Russian Stock Exchange has been closed for the ninth day running. Russian government debt has been downgraded to junk status and ratings agencies are warning of an imminent Russian default,” Freeland said. 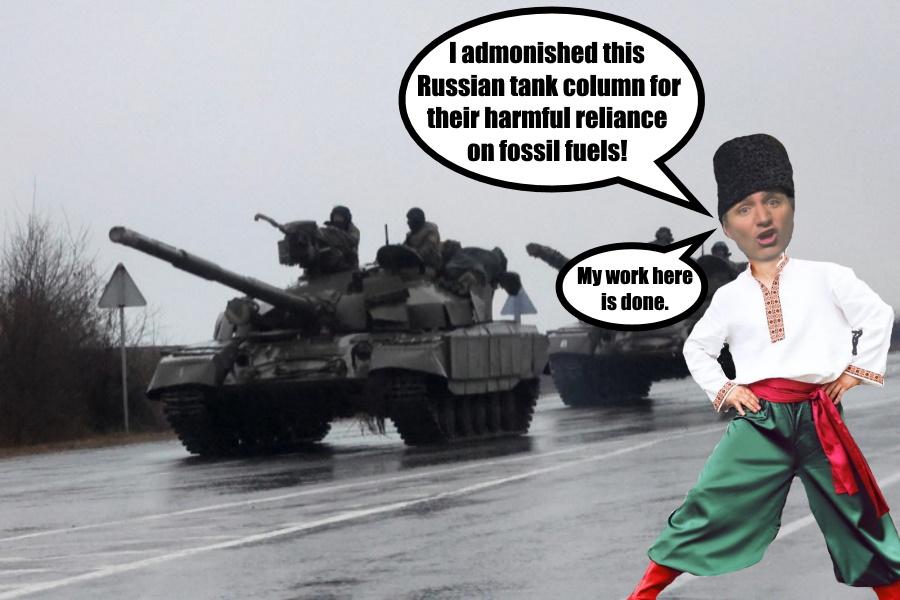 But sanctions have not stopped Russian President Vladimir Putin from intensifying the attack on Ukraine, where his military has gone as far as to bomb a maternity hospital.

When asked where the line should be drawn, Trudeau said Putin already crossed it by invading Ukraine.

“Putin already crossed the red line. He has already invaded a sovereign country, broken the UN charter, shown an absolute disregard for human life and the rule of law… and that is why the world is responding with the best tools we could possibly have to save more lives and put an end to this,” he said.

Trudeau would not rule out the possibility of Russia using nuclear weapons when asked, noting “many of us didn’t think he would invade Ukraine either.”

Ukrainian authorities and people cowering night after night in bomb shelters say a no-fly zone would protect the civilians from Russian air strikes. Some of those rallying NATO to step in have suggested that the alliance is sacrificing Ukraine to save Europe – a notion Freeland disagrees with.

“I believe that Ukraine is fighting to save Europe,” she said.

Asked about Putin’s state of mind, Trudeau said “Putin has painted himself into a corner.”

“Right now, he’s beginning to see he cannot win, the resolve of the Ukrainians is too strong,” he said. “The resolve of the rest of the world, the condemnation of 141 countries of the UN of what he’s done means he is in a very bad place of his own making, is his own responsibility and we will continue to make sure that he stops.”

With files from the Associated Press

Please note: This content carries a strict local market embargo. If you share the same market as the contributor of this article, you may not use it on any platform.