Ukraine's president has attacked Nato leaders over their refusal to implement a no-fly zone around the country.

In a fiery speech, Volodymyr Zelensky said the West's reluctance to intervene had given Russia "a green light" to continue bombarding towns and villages.

Nato has argued that a no-fly zone will result in confrontation with Moscow.

And Russia's President, Vladimir Putin, said on Saturday that any such move would be seen "as participation in an armed conflict by that country".

Referring to sanctions imposed on Russia by the West, the Russian leader said they were "akin to a declaration of war, but thank God it has not come to that".

In his speech from Kyiv, Mr Zelensky said he disagreed that direct action could "provoke Russia's direct aggression against Nato".

In angry comments, he said the argument reflected the "self-hypnosis of those who are weak, under-confident inside" and that Western reservations indicated that "not everyone considers the struggle for freedom to be Europe's number one goal".

On Friday, Nato's secretary-general, Jens Stoltenberg, warned that the introduction of a no-fly zone could lead to a "full-fledged war in Europe involving many more countries and causing much more human suffering".

US Secretary of State Antony Blinken also ruled out the introduction of a no-fly zone, but told the BBC he was convinced Ukraine could win its war with Russia.

In the south-eastern port city of Mariupol, the city's mayor has said that residents are under a "blockade" after days of "ruthless" attacks from Russian forces which has seen power and water shut off to the city's 450,00 strong population.

Vadim Boychenko wrote on the Telegram messaging app that the city was "simply being destroyed" and said officials were prioritising "the establishment of a ceasefire so that we can restore vital infrastructure and set up a humanitarian corridor to bring food and medicine into the city". 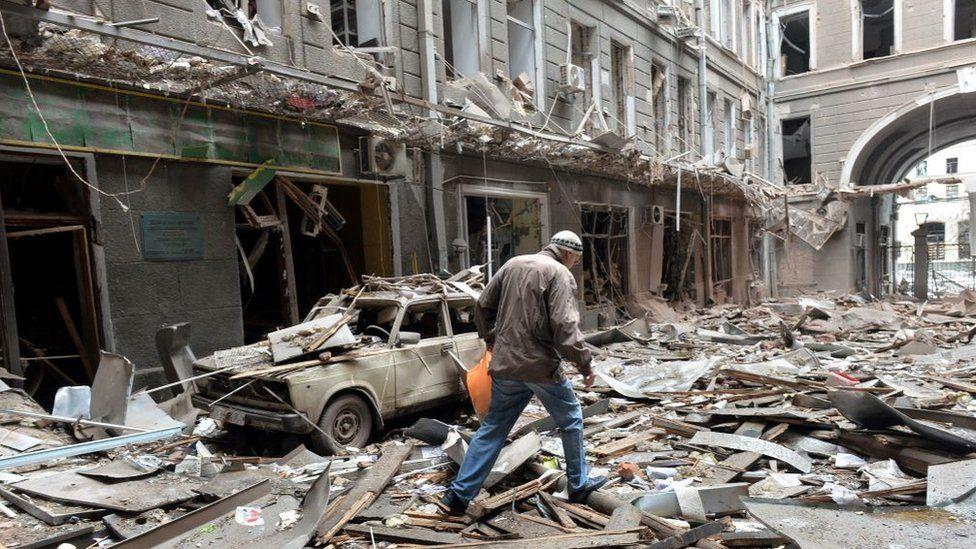 In Kyiv, a massive convoy stretching out over 40 miles (64km) remains stalled outside the city, but the Ukrainian capital has come under renewed assault, with explosions caused by intense shelling audible in the city centre.

There have also been unconfirmed reports of fresh fighting on Saturday in the north-eastern city of Sumy and of rocket attacks on the train station in Ukraine's second city, Kharkiv, above a metro station where city residents are sheltering from shelling, and in the northern city of Chernihiv.

And the US ambassador to the UN, Linda Thomas-Greenfield, has warned that Russian troops have advanced within 20 miles (32km) of Ukraine's second biggest nuclear facility.

Meanwhile in Russia, a new law signed by President Vladimir Putin that would impose prison terms of up to 15 years on people charged with spreading "fake news" about the war in Ukraine has seen several western media outlets, including the BBC, suspend operations in the country.

Tim Davie, the BBC's director-general, said the legislation "appears to criminalise the process of independent journalism" in Russia, while the Washington Post said it would remove bylines from pieces written by its reporters in Russia.

It comes as Sky News released dramatic footage of their correspondent Stuart Ramsey coming under fire outside Kyiv.

Meanwhile, Mr Zelensky addressed massive rallies in support of Ukraine in several cities across Europe, including the Czech capital, Prague, and the Georgian capital, Tbilisi.

He warned demonstrators: "If Ukraine does not survive, the whole of Europe will not survive."

But in the Serbian capital of Belgrade, some 4,000 people have taken part in a pro-Russian rally that marched from a monument of Russian Tsar Nicholas II to the Russian embassy.

Elsewhere, in a sign that Western sanctions are starting to have a tangible impact, Italian police have seized the yachts of two of Russia's wealthiest oligarchs.

Another yacht, owned by Gennady Timchenko, another oligarch with close ties to Putin, has been impounded in Imperia, officials said.

Mordashov is worth an estimated $29bn and built his wealth around the Russian steel producer Severstal, while Timchenko is said to hold around $17bn of assets and made his fortune in oil trading.

Are you in the affected region including Mariupol and Volnovakha? Share your experiences by emailinghaveyoursay@bbc.co.uk.

Please include a contact number if you are willing to speak to a BBC journalist. You can also get in touch in the following ways:

If you are reading this page and can't see the form you will need to visit the mobile version of the BBC website to submit your question or comment or you can email us at HaveYourSay@bbc.co.uk. Please include your name, age and location with any submission.

More on this story

Prev: How to choose the right phone?