The mobile chipset scene has always been rather unique. Unlike more traditional computing avenues like the PC ream, in the ARM world variety isn't really all that abundant on a year to year basis. That's how you end up with a sea of competing flagship handsets typically based around the exact same Qualcomm silicon. That has been the status quo for quite a few years now.

So, in a sea of sameness, how can a "gaming" phone realistically differentiate while using the exact same internals as its often cheaper competitors? Well, it certainly goes beyond than merely getting the speediest chipset around. There are extra aspects such as CPU governors, performance curves and most importantly - thermal management -which play a huge role in real-world results.

We recently published a deep dive on the matter of gaming smartphones in general, which you can check out here for more in-depth details.

And when it comes to squeezing the best performance possible out of an ARM chipset, Asus and Republic of Gamers really go above and beyond the competition. The original ROG Phone actually leveraged cherry-picked or so called "speed binned" Snapdragon 845 chips, which it then ran at a maximum frequency of 2.96GHz (on the powerful core cluster), instead of the 2.8GHz if the vanilla Qualcomm chip. That is essentially a factory overclocked processor and a rather novel idea in the smartphone realm at the time.

Well, this year, Qualcomm themselves took this idea one step further by doing the speed-binning and overclock itself, resulting in the Snapdragon 855+. Naturally, that's the chip Asus went for the no-compromise ROG Phone II Ultimate Edition. The best possible 20-layer variant of the chip, to be even more specific. This is the first 855+ unit to come by the office, so we were eager to test out just how much better it performs compared to its vanilla sibling.

In terms of competitors for the ROG Phone II we picked out a selection including the regular Snapdragon 855, Samsung's Exynos 9820 and 9825 and Huawei's Kirin 980. Like most gaming phones, the ROG Phone II also has a performance mode, in this case calledX Mode. X Mode itself has a few presets depending on how much performance gains you'd like. For our runs below we've used the default preset. What X Mode does is actually a bit more complex than simply bumping up CPU clocks. Rather it tries its best to smooth out performance dips and combat the inevitable thermal-throttling.

As is tradition, we start off with a pure CPU test and GeekBench. The difference in raw compute scores is slim. In real-world terms, however, having X mode on, as well as the external active fan attached, do make a tangible difference in sustained performance on the ROG Phone II.

Then there is the matter of the phone's impressive 120Hz OLED panel. Adding it to the mix is actually pretty important when it comes to any sort of benchmark with an on-screen rendering component. All the ones we typically run don't actually impose an FPS cap. Since the overclocked Adreno 640 GPU inside the Snapdragon 855+ is powerful enough to push past the 60fps mark on certain tests and the display has the refresh rate to accommodate the extra frames, while at 120Hz the ROG Phone II actually scores a lot higher. The graphics component in AnTuTu 8, as seen here at 120Hz with and without X Mode and then 60Hz illustrates this perfectly. The same is true about Basemark OS 2.0 - another compound synthetic benchmark. 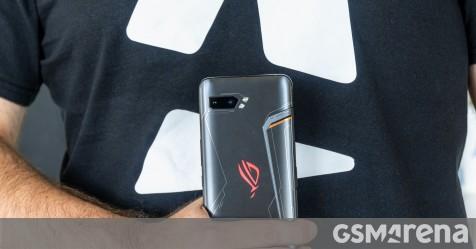 Before moving on to more GPU tests, it is worth noting that unlike GeekBench, Basemark appears to favour the ROG Phone II a lot better even at 60Hz. Plus, the variances in performance at 60Hz, 120Hz and with X Mode are more clearly defined.

Like we already mentioned, the overclocked Adreno 640 GPU inside the ROG Phone II, working at 700Mh pushes out enough frames to break the 60fps mark in some benchmark runs, like GFX Manhattan 3.1. Hence, while its off-screen scores are representative and comparable to the rest of the devices on the chart, the same isn't exactly true about the on-screen run. For this one the ROG Phone had its display at 120Hz, which is how the top 69fps result transpired.

Ramping up the GPU load with something like the new Aztek test brings the on-screen results back to comparable terms, since 60fps remains an unreachable bar even for the beefed-up 700MHz Adreno 640. That being said, the extra performance it churns out over its vanilla Adreno sibling is not insignificant.

And with the increasing number of smartphone displays pushing past the 60Hz mark, we are happy to see a noticeable ramp-up in game engines and apps that can also render at over 60fps. There is still some searching involved to unearth high-refresh rate titles, but the effort is well worth it.

Another thing we can't fail to mention and test while on the topic of performance on the ROG Phone II is the active cooling fan attachment that comes in the box. Just like on the original ROG Phone, it complements the specifically crafted internal heat pipe design of the phone, culminating in a small exposed radiator area. In not only ties in well into the gaming aesthetic, but also provides a convenient outlet for heat. Kind of a necessity, since unlike the nubia Red Magic 3 Asus decided to keep the fan external.

As for real-life benefits from using the fan attachment, these can best be summarized as an effort into sustained performance and comfort over prolonged gaming sessions. That is to say that you won't really get any benchmark-breaking peek performance just from having the fan on the ROG Phone II.Rather a small, nifty bump up in numbers. But you will definitely be able to sustain a higher and smoother average frame rate in games for longer, as thermal-throttling inevitably sets in. Plus, your hands will be a lot more comfortable and less sweaty while holding the phone and its metal frame, which gets particularly toasty in certain areas.

We'll definitely have more in-depth info on sustained performance and thermals for the ROG Phone II in the upcoming full review. So stick around for that.

Next: Black Shark 5 and 5 Pro Spotted on TENAA: Full Specifications Revealed Ahead of Launch