At the MWC 2022, Realme finally announced the launch of the GT 2 and GT 2 Pro for the international market but it did not say anything about when the Indian launch of these phones will happen.

Realme held its MWC 2022 event on Monday where it announced a slew of products. It launched the Realme GT 2 series, the Realme Book Prime laptop, and the Realme Buds Air 3. The first two products are not essentially new to the market as they are already available to buy in China, but their international launch means customers outside of China will be able to buy them soon. 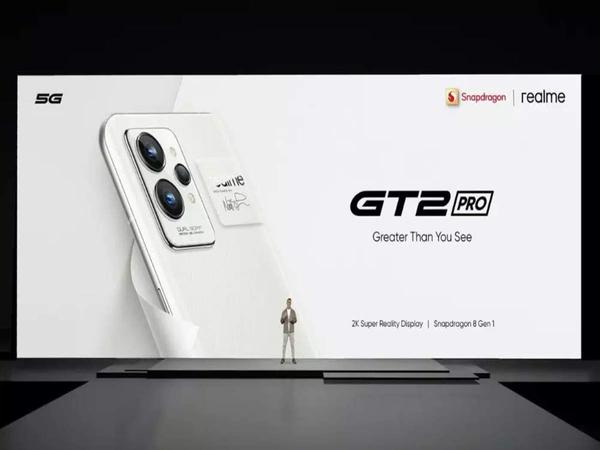 The Realme GT 2 series, which comprises two phones - the GT 2 and the GT 2 Pro - is finally out of China. Realme launched the two phones in China in early January, but even today’s launch did not mention anything about when the company’s flagship phones are coming to India. In any case, the European prices of the Realme GT 2 series suggest they will give the Samsung Galaxy S22 a run for its money.

The international version of the Realme GT 2 Pro and GT 2 are exactly the same as the Chinese versions except for the software. The global Realme GT 2 series phones come with Google apps and support for Google Play services. The rest of the specifications are the same. Before we take a look at them, let us get the prices out of our way.

The Realme GT 2 Pro is the company’s first flagship smartphone that comes with top-shelf features such as a 2K display and 50-megapixel Sony sensors. The GT 2 Pro comes with a 6.7-inch Samsung OLED display with a resolution of 3216x1440 pixels. This display uses an LTPO panel, which allows it to dynamically adjust the refresh rate depending on the content. The Corning Gorilla Glass Victus protects the display that supports a peak brightness of 1400 nits.

Powering the GT 2 Pro is an octa-core Snapdragon 8 Gen 1 processor, which is the flagship processor for Android phones of 2022. Realme said the cooling area inside the GT 2 Pro is constructed with an all-new 9-layer cooling structure with a 4129 sq mm “Stainless Steel VC” area. The phone uses Android 12-based Realme UI 3.0.

Photography enthusiasts will love the 50-megapixel Sony IMX766 flagship sensor on the Realme GT 2 Pro. Creators will appreciate the support for optical image stabilisation. There is a second 50-megapixel ultra-wide-angle camera with a field of view of 150-degrees, and a 3-megapixel microscope camera with 40X magnification. For selfies, there is a 32-megapixel camera inside the display’s punch-hole.

Inside the Realme GT 2 Pro is a 5000mAh battery with 65W fast charging that Realme has been using on its phones for almost two years now. There are dual speakers with Dolby Atmos support and support for NFC payments on the GT 2 Pro.

The Realme GT 2 is a little toned-down in terms of specifications. It features a 6.62-inch AMOLED display with Full-HD+ resolution, a refresh rate of up to 120Hz, and a peak brightness of 1300 nits. It uses a Qualcomm Snapdragon 888 chipset, which was the flagship processor for last year’s Android phones, and runs Android 12-based Realme UI 3.0. The rest of the specifications of the GT 2 Pro are the same as the Pro variant.